More Than Just a Pet 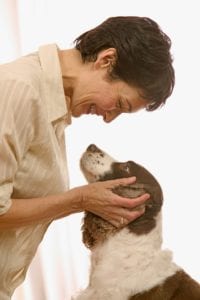 More Than Just a Pet – Service Animals Assist People with Many Types of Disabilities.

So, what is a service animal? A service animal is not just a pet or companion. “Service animals perform some of the functions and tasks that the individual with a disability cannot perform for him or herself” (USDOJ). As a result, the person must have a disability according to a medical professional and the Americans with Disabilities Act (ADA), which can be either a “physical or mental impairment” (USEEOC).
In addition, the animal must be trained to mitigate a person’s disability by performing such tasks as retrieving, leading, pulling, providing balance and/or alerting. They should also be able to follow basic obedience commands such as sit, stay, here, down and/or follow, as well as exhibit good behavior in public places.
What rights do service animals have? “Under the ADA, State and local governments, businesses, and nonprofit organizations that serve the public generally must allow service animals to accompany people with disabilities in all areas of the facility where the public is normally allowed to go” (ADA 2010).
What kind of animals are they? For many years, the Americans with Disabilities Act of 1990 (section 36.104 of the title III regulation) did not limit service 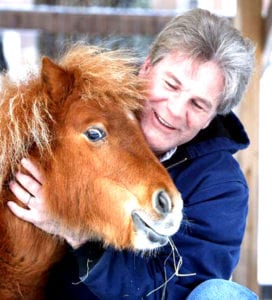 animals to dogs. Therefore, although a service animal has most often been a dog, it could also have been another species of animal such as a monkey, miniature horse, pig or cat.
However, in September 2010, a final rule was published in the Federal Register to amend the service animal definition to be limited to dogs (with some exceptions for miniature horses). This new regulation went into effect in March 2011 (ADA Fact Sheet). Of course, a person may still keep a service animal such as a pig or monkey for their personal use, but they are not granted public access.
There can be some confusion regarding service animals that assist those living with invisible disabilities caused by chronic illness, injury, pain and mental disorders. Nonetheless, for those debilitated by such symptoms as extreme pain, fatigue, dizziness, blurred vision and cognitive impairments, a service animal can make a vast difference in their quality of life. These service animals can perform helpful physical tasks such as picking things up off the floor, reminding a person to take their medicine, helping with balance and more.
Service animals are also changing lives by alerting their owner of a physiological response such as a seizure or potentially dangerous changes in blood sugar levels. You may have even read about Belle the beagle. She dialed 9-1-1 after her diabetic owner, Kevin Weaver, had a seizure and collapsed. Kevin believes he would not be alive today if it were not for Belle (AP).
For those living with various types of mental disorders, ”The final rule also clarifies that individuals with mental disabilities who use service animals that are trained to perform a specific task are protected by the ADA” (ADA Fact Sheet).
In these cases, a service animal can alert the handler to an incipient manic episode, anxiety or panic attack, as well as alert the owner to aggressive driving. He can also assist the owner with confidence in leaving the home or exiting a situation that is causing a rise in anxiety, panic, distress and/or fear. What’s more, he may help the handler with physical tasks such as reminding the person to take their medication, assisting them with finding their keys or the telephone, turning on lights to safety check a room and nudging them to wake them up (PSDS, Tasks).
For those battling Post Traumatic Stress Disorder, one of the benefits of service animals is they can also interrupt flashbacks and nightmares, reduce anxiety and stress and help regain self-assurance (Project HEAL).
The Psychiatric Service Dog Society advises anyone obtaining a service dog for their psychiatric disorder should get a letter from their doctor (PSDS FAQ). Their advice probably holds true for all service animal owners, especially those living with other types invisible disabilities.
In all, a trained and qualified service animal used for reasons under the ADA guidelines is allowed access to public places. “Under the Americans with Disabilities Act (ADA), privately owned businesses that serve the public, such as restaurants, hotels, retail stores, taxicabs, theaters, concert halls, and sports facilities, are prohibited from discriminating against individuals with disabilities. The ADA requires these businesses to allow people with disabilities to bring their service animals onto business premises in whatever areas customers are generally allowed.” In addition, “An individual with a service animal may not be segregated from other customers” (USDOJ). 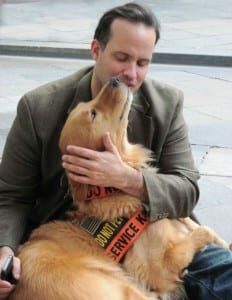 How does a proprietor know the handler’s animal is a service animal? Although some service animals wear special harnesses or vests and some owners carry certifications, these things are not required. Therefore, “When it is not obvious what service an animal provides, only limited inquiries are allowed. Staff may ask two questions: (1) is the dog a service animal required because of a disability, and (2) what work or task has the dog been trained to perform. Staff cannot ask about the person’s disability, require medical documentation, require a special identification card or training documentation for the dog, or ask that the dog demonstrate its ability to perform the work or task” (ADA 2010).
Many business owners have a “no pets” policy on their premises. Nonetheless, “A service animal is not a pet. The ADA requires you to modify your ‘no pets’ policy to allow the use of a service animal by a person with a disability. This does not mean you must abandon your ‘no pets’ policy altogether but simply that you must make an exception to your general rule for service animals” (USDOJ).
Often a business will state that their local county health department has told them that only a seeing eye or guide dog has to be admitted. However, “… [you are in violation of the ADA] if you refuse to admit any other type of service animal on the basis of local health department regulations or other state or local laws. The ADA provides greater protection for individuals with disabilities and so it takes priority over the local or state laws or regulations” (USDOJ).
Many transportation companies often fear that admitting an animal into their taxis, buses and trains would be detrimental to their other customers. In spite of this, “…under the ADA regulation issued by the Department of Transportation (49 C.F.R. Part 37) for the provision of transportation services to individuals with disabilities by public and private entities, section 37.167(d) requires those entities to permit service animals to accompany individuals with disabilities in vehicles and facilities. The regulation defines the term ‘service animal’ in the same manner as the Department’s ADA regulation” (Dunne).
Of course, not all animals helping people are deemed service animals. For example: Therapy, social and facility animals are often utilized for visitations or are placed in homes or facilities “…to provide therapeutic benefits” (ADI). Yet, “Federal laws have no provisions for people to be accompanied by therapy animals in places of public accommodation that have ‘no pets’ policies. Therapy animals usually are not service animals” (PetPartner).
This includes emotional support animals that are not trained as service animals: “Dogs that are not trained to perform tasks that mitigate the effects of a disability, including dogs that are used purely for emotional support, are not service animals” (ADA Fact Sheet).
On the other hand, regarding matters of housing, “The Fair Housing Act (42 U.S.C. 3604(f)(3)(B)) prohibits discrimination against a renter or buyer on the basis of disability. Discrimination includes a refusal to make reasonable accommodations in rules, policies, practices, or services, when those accommodations may be necessary to afford a person with a disability equal opportunity to use and enjoy a place of residence. While the Fair Housing Act and the regulations issued by the Department of Housing and Urban Development do not specifically address service animals, it is likely that the Act would at times require that service animals be allowed in a housing facility in order to afford a disabled individual fair use and enjoyment of the facility”.
Thus, in the light of housing issues with people with verifiable disabilities, “… [The Fair Housing Amendment Act and the ADA] protect the right of people with disabilities to keep emotional support animals, even when a landlord’s policy explicitly prohibits pets…. In most housing complexes, so long as the tenant has a letter or prescription from an appropriate professional, such as a therapist or physician, and meets the definition of a person with a disability, he or she is entitled to a reasonable accommodation that would allow an emotional support animal in the apartment”.
Call us for more information: (805) 439-2229 or registermyserviceanimal.com

Thanks for subscribing! Please check your email for further instructions.

Something went wrong. Please check your entries and try again.
×